Those who carry a gun have a responsibility to prepare themselves to make the shoot/don’t shoot decision correctly.

While the final decision must be made on the spot, certain aspects of that decision both can and should be considered in advance. Failure to consider these aspects in advance is being remiss in one’s responsibility as an armed citizen, because it vastly increases the risk that you’ll make the wrong decision under stress, and perhaps kill an innocent person.

Neglecting to consider these aspects also vastly increases the risk that you’ll end up in jail, in the grave, in the hospital, or in the suicide-watch wing of the local loony bin.

In short, carrying a gun but failing to think about this stuff is both poor citizenship and poor tactics.

One of the first questions to consider, when deciding whether or not to even carry a gun, is, “Is it ever permissible to deliberately kill another human being?”  Think about this long and hard. Within your moral view, are there any circumstances at all in which you believe it is not wrong to kill another person?

If your answer to this first, most basic, question is yes, you must then ask yourself the logical follow-up question: “Am I myself able to pull the trigger if that is what I must do in order to survive?”  Within your own religious, ethical, and moral paradigms, can you reconcile yourself to doing whatever it takes? If your deliberate action kills another human being, will you be able to live with yourself afterward? 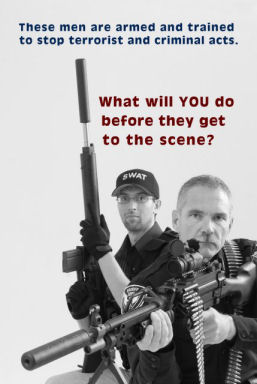 If you even suspect you cannot, you have no business carrying a gun no matter who tells you you ought to. That is nothing more than a tragedy waiting to happen. Instead of carrying a handgun, you may want to look into less-lethal defense options, such as pepper spray or martial arts classes. Although these intermediate steps will never level the playing field the way a gun does, they are an excellent choice for those who are unprepared to use lethal force.

Be aware, though: pepper spray is no magic potion. And many martial arts can be just as deadly as using a firearm, only more messy and less certain.

Carrying a handgun means that you are willing to kill an attacker in order to save your own life. Those who carry a gun for defense but have never seriously considered the possibility of killing someone could be in for a lifetime of regrets.

So for the sake of your own mental health, you should answer those two most basic questions to your own satisfaction before you ever arm yourself. That’s the necessary starting point, but it isn’t the place to stop.

The next logical aspect of the shoot/no shoot decision that should and must be made in advance is “Under what circumstances am I willing to take the life of another human being?” Of course you will not be able to list every conceivable circumstance you may encounter! Nevertheless, it is both good and necessary that you consider possibilities in advance.

Some of my own personal boundaries are:

My point is not that your boundaries should be the same as mine. It is simply that even though you must wait until the very last moment to make a specific shoot/no shoot decision, you can and should have certain things already set into your decision-making machinery in advance. Without these pre-decisions in place, you probably will not have enough time to do anything but stand there with your brain frozen solid.

Another part of this decision-making process that is absolutely vital is that you understand the lethal-force laws in your state. If someone breaks into your home, may you shoot them as they enter even if they are not visibly armed? Do you have a duty to retreat in your own home? If someone attacks you in public, do you have a duty to retreat? Under what circumstances may you legally display your weapon?

Find out the answers to these and other legal questions if you can. Chances are that your state’s laws are online, and you can look them up. If you have taken or will take a concealed-carry class, ask your instructor about the laws governing lethal force. Read Massad Ayoob’s book In the Gravest Extreme, or better yet, enroll in  Ayoob’s MAG-40 class. Ask around online on firearms discussion forums (but always insist on links to source material!). If all else fails, hire a lawyer and spend an hour of the lawyer’s time going over the lethal-force laws where you live.

The better your understanding of the laws, the more free you will be to act in a moment of crisis. When you know what the law is, your mind will be free to consider tactics instead of freezing on the legal question. You should be able to simply do what needs to be done.

When you think you have a basic academic understanding of your local laws, get in the habit of mentally applying those laws to situations you hear or read about.  When you watch the evening news, or read the newspaper, and come across a news story about violent crime, see if you can determine whether the victim could legally have fought back using lethal force. Were the important lethal-force elements present? At what point in the story could the victim have fought back? If the victim could not legally have drawn or used a firearm, what element(s) in the story would need to be different so that she could have done so? What information was missing from the news reports, and how could the missing information have affected the legal question?

Train yourself to recognize the basic elements of a legally good or legally bad shoot. Learn to do this when you are not under stress. If you cannot do this while you are not even subject to the accompanying emotions, sounds, smells, and sights of a deadly attack, making the right decision under extreme stress might be only a matter of dumb luck.

On the other hand, if you have carefully considered all such questions in advance, and have nailed them into your consciousness with purposeful role play and considered imagination, then when the moment of truth arrives you may be able to simply do what needs to be done, without getting hung up in a deadly cycle of doubt and denial.