Some folks say the most dangerous place in the world is between a Mama Bear and her cubs. It may be so. I’ve never met a Mama Bear, myself.

The most dangerous place I ever stood was between a cornered cat and an open door.

Until she needs to use them, her claws stay sheathed. She doesn’t go around threatening to maul people. She’s cuddly, she’s cozy, she likes to curl up next to a crackling fire on a warm winter’s day. She’s great company.

But don’t try to trap her in a bad situation.

This site is about women and guns, not about cats. But in a way, it’s about the cornered cat in all of us. It’s about the determination to get away from an attacker if you need to. It’s about making the decision to say, “Not me. Not mine. Not today.” And it’s about the tools to make that decision stick.

If you have to fight …

~ Things I Learned From My Cat ~

Avoid:  She avoids danger in the first place. (“Ink trickled down to the bottom of the household…”) Cats vanish when there’s trouble brewing.

Get Away:  She gets away from danger as quickly as she can, if she couldn’t avoid its arrival. Her ears go up, her eyes get wide, her tail fluffs up, and she’s outta there quicker than you can say scat!

Don’t Bluff:  She doesn’t threaten. You never see her pull out her claws and wave them around. Her claws come out when she uses them, but stay sheathed otherwise.

Use Your Voice:  Has a wonderful command voice, that low growl that means, “Stay away. Don’t touch me. Keep your distance.” Everything about her body language says that grabbing her would be a bad idea.

Do Whatever It Takes:  If she’s grabbed, she does whatever she needs to do in order to escape and get to safety. She’ll run right over you on her way out of the room. As soon as you grab her, every part of her body turns sharp and dangerous. You quickly learn that she’s got teeth and claws underneath that fluffy exterior, and she goes all out. 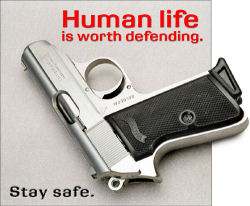 Did you ever notice that there’s no “sorta” setting on a cat? Whatever she does, she does with her whole heart. If she’s curled up on your lap, purring, that’s all she’s doing right then. If she’s trying to get you to feed her, she dedicates her whole self to doing that. And when she needs to get away from danger, that’s all she’s doing. She’s not indecisive about it. She doesn’t hold back for fear of hurting someone. She simply does whatever she needs to do in order to get away.

Don’t Stick Around: As soon as you let go, she’s gone. She doesn’t stick around to see what happened or to chide you for what you did. She doesn’t chase the defeated enemy.

Flee to Safety: When she leaves, she doesn’t scamper every which way looking for a place to hide. She heads straight for someplace she knows is safe.

Not a perfect analogy, because cats don’t call for help when they’re in over their heads. As soon as you’ve gotten away from an attacker and reached a place of safety, you need to call the police and report what happened.