Listed below are some conditions under which I intend to fight back even if I don’t think I can win.

I have made this list for myself because I understand that the natural thing to do, when something bad happens, is to deny that it is happening: “This can’t be happening to me!”

Even if you get past that thought (a lot of victims never do), the other natural tendency is to tell yourself that if you wait, if you do what the other person says, things will get better. The situation will work itself out. All you have to do is cooperate. The attacker will take your wallet, your car keys, whatever, and leave you alone. Just wait, do what he says, and everything will be okay. That’s what most people who are attacked tell themselves — and in most cases, that is exactly what people should do. Even if you are armed, why kill someone if you don’t have to? It’s only stuff!

A woman forced into a car by an attacker, for instance, has a 95% or higher chance of getting killed if she complies. Even if it seems highly likely the attacker will kill her right there if she doesn’t get in the car, the fact is that right at that moment, the odds are the very best they will ever be for her. They might be lousy odds, but they aren’t going to get any better. So I have decided, in advance, that if I’m ever in that situation, that’s when and where I will fight back no matter what my frozen brain and in-denial guts are telling me about my odds. 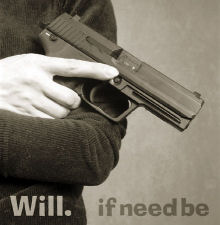 Similarly, a man forced into a back room on his knees, with his back to the attacker, has just been put into the execution position. Most of the time, when someone is forced into this position, what comes next is a bullet in the back of the skull. Once you are on your knees, you don’t have any more choices left, even if do you suddenly realize what is about to happen. If you’re going to save your own life in such a situation, you have to make the choice to fight back before you’re on your knees.

The purpose of analyzing this stuff beforehand is to make sure that even my frozen brain and my in-denial guts cannot lull me into cooperating if I am ever in one of the extreme places where a victim really needs to fight if she is going to survive. Because I’ve thought about this stuff in advance, if something like it ever happens, even my frozen brain will have a definite decision point.

Some of my personal boundaries are:

My point is not that your boundaries should be the same as mine. It is simply that even though you can wait until the very last moment to make the final decision about fighting back, you should have certain things already set into your decision-making machinery beforehand.  If you don’t, and if you are ever attacked, you may not have enough time to do anything but stand there with your brain frozen solid while your attacker takes all your choices away.