This article by Rachel Chumita was originally published in September 2006 by the Buckeye Firearms Association, and can be found at http://www.buckeyefirearms.org/article3266.html. I think Rachel is right on the money!

Unfortunately, many women don?t see it that way. Many women look at guns as scary weapons, instead of a great means of self-defense. Instead of choosing the right to arm themselves, women take useless self-defense classes. I am a strong believer that self-defense classes often cause more harm than good. They give women a false sense of security. I know, this firsthand because I took a self-defense class one semester of college. Every night after getting out of class I would think to myself ?I dare any rapist to try to mess with me.? All that changed though when I decided to practice some of my moves on my husband (then boyfriend). Although he is a bit on the smaller side, it amazed me at how easily he overpowered me. I?ve heard feminists claim that women are every bit as strong as men. If that were true, why do women have to meet lower standards than men for physical agility tests? Although I?ve met some pretty tough girls, the vast majority of women would not be able to defend themselves against even the smallest of men. 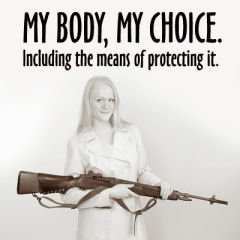 Being only 4?11?, I am well aware that I would be an easy target. A firearm gives me a chance to defend myself. The risk I am at due to my size used to be a major concern to me, before I met Chris, the man who would become my husband. When I met him I knew a little about guns, and I thought they were a good thing; but I never really thought that I would be able to shoot one, let alone be able to carry one around with me. Like I said though, that was before I met my husband. Chris taught me just how important Second Amendment rights are. He took me to the shooting range and taught me how to handle and shoot a gun. I learned that guns aren?t just for guys; I was actually able to hit a target! For our one year anniversary of dating, Chris bought me a cute little Kel-Tec P3AT that fit my hand a lot better than his Sigs. I was surprised at how easily I was able to shoot and control my new gun. I now believe that I proficient enough in my skills to get my concealed handgun license (CHL).

However, lately a women?s right choose is under attack. So called women?s rights organizations will fight over the right to abort an unborn baby, but they completely oppose the rights of women to defend themselves with firearms. Numerous stores across Ohio have posted no concealed carry signs, which put women at more of a risk of getting raped or killed. The law prohibits concealed carry on college campuses, making female students more vulnerable to attack as they walk to and from classes; especially night classes. Politicians say they?re for women?s rights, but then they turn around and pass anti-gun legislation! Employers are careful not to discriminate against women while hiring, but then they ban employees from carrying, making those same women defenseless.

Yes, as a woman, I have the right to choose, and I?m choosing to protect myself.