The shiny green aluminum can sparkled in the glare of the blazing afternoon sun. It sat perfectly still, ready to fall over and roll away with the slightest gust of wind. But the wind was still. The pony-tailed little girl hidden in the shadow of the shelter also sat perfectly still. Her eye focused sharply on the front sight of the .22 rifle she held snugly to her shoulder. An eternity wandered away while two seconds passed. ‘Dance,’ the little girl whispered quietly to the tiny tin can. Her finger barely moved, and the rifle spoke. The can leapt into the air. The little girl’s eyes widened in surprise. ‘I hit it,’ she shouted. Her father’s eyes glowed with pleasure. The little girl rested the rifle on the bench and then did a little dance of her own. ‘I did it, I did it, I did it,’ she sang.

‘You nailed it dead center,’ her father beamed. His proud smile mirrored her gap-toothed grin. As I watched them, I wondered where the little girl’s mother was. I felt sorry for her, missing this moment. And I couldn’t help thinking, ‘Why should the fathers be allowed to hog all this fun?’

Even in gun owning families, a lot of kids never get taken to the range at all, especially if their parents are divorced or if their dad works weekends. And even if dad does take the kid shooting whenever he can, the more times a child has been to the range, the better: each trip defuses a little bit more of that dangerous childish curiosity, and gives the parents one more chance to talk to the kid about safety around firearms.

Young girls especially should have a chance to see women shooting, so they know there’s nothing weird or unfeminine about girls who like to shoot. If you have a daughter, and if you want her to grow up willing and able to protect herself, you owe it to her to let her see you working with firearms and enjoying them.

Sons can also benefit from seeing their mom shoot. Especially as they head into the teen years, it doesn’t do any harm at all for kids to see that their mom is equipped to take care of herself. I may not be able to tower over them like I once did, but darn if I cannot still outshoot my teenage boys ‘ and I’ll take whatever respect that earns me, thank you very much.

The most important lesson kids can learn about guns is that firearms can do a lot of damage and therefore need to be handled with caution. A fun day spent on the range with reactive targets can really hammer this lesson home. When I thought my kids were old enough to absorb the point, I loaded them up and took them to the range with me. Our targets that day included pumpkins, zucchini, half-rotten tomatoes, and a several jugs of water.

On the way there, I asked the boys to tell me the safety rules.

‘All guns are always loaded,’ the kids recited. ‘Never point your gun at anything you don’t want to shoot. Keep your finger off the trigger until your sights are on target.’ The kids were all competing to be the first to say the next rule. ‘Be sure of your target, and what’s beyond your target.’

At the range, I asked the boys to point out which directions were safe to point a gun, and which ones were not safe. They discussed this together for a minute, then the oldest said, ‘Well, the range rules say we can only point that direction’ (the back of the berm), ‘but it’s probably safe to fire at the side berms, too.’

‘Where isn’t it safe to point?’

‘Yeah, that’s true. Or at any other people. What about, if I went down on one knee, and shot toward the top of a target?’

‘I know! I know!’ Our irrepressible youngest child was jumping up and down. ‘Pointing at the ground is safe ‘ but only if your toes aren’t in the way.’

‘Yep, that’s a good way to put it. If you point at the ground, make sure it’s not too close to your toes. Okay, let’s get these pumpkins where they’re supposed to be.’ The boys helped me lug the vegetables to the end of the range and get them set up at the base of the berm. Soon they were heavily involved in a rather technical discussion of the merits and demerits of various vegetables. A minority opinion held that we should have brought some broccoli to the range with us. Surprised, I said, ‘But that wouldn’t do anything interesting when we shot it.’

‘I know,’ the kid replied, ‘but at least we wouldn’t have to eat it.’ Can’t argue with that kind of logic.

Finally, we were ready to rock. The vegetables were all up on the firing line, and the kids ‘ eye and ear protection in place ‘ were arrayed alongside me, waiting for the big moment. They’d all decided we should see what the pumpkins did, first, so I picked up their .22 rifle and aimed at the first pumpkin. Splat! I unloaded the weapon and set it down on the bench.

‘Anyone want to see what the pumpkin looks like now, up close?’

‘YEAH!’ the kids all shouted, so we went forward of the line to examine the hapless veggie. The entry wound was not impressive, just a .22 caliber hole punched in the skin, but a large crack zigzagged across the rear of the pumpkin.

By now, the kids were very excited and chattering happily about what had just happened to ‘that poor pumpkin.’ I took the moment to catch their attention. ‘Boys, I want to ask you something.’ They all looked at me. ‘Do you think that would have been messier if I had shot it with my 9mm?’ Grins all around, and we went back behind the line. This time, I pulled out my Glock 26 and aimed carefully at one of the zucchini. Wheee! The squash flew into little bits as the boys cheered. ‘Do it again, mom!’

‘Let’s try the .22 again,’ I suggested, ‘and see what it does to the tomato.’ Everyone agreed, so I let our oldest shoot at the tomato. A very satisfying splatter of tomato guts was his reward, and his grin was big enough he could have swallowed one of the pumpkins.

Within a short time, all the veggies had been splatted and the water jugs were empty. I walked the boys downrange to look at the carnage. The pumpkins with gaping holes on their backsides caught my attention first, so I picked the first one up and showed it to them. ‘Boys,’ I said very seriously, ‘I want you to look at this. We’ve had a lot of fun today, because shooting is fun. But every time you think about breaking one of the safety rules, I want you to remember what this pumpkin looks like. It’s fun and it’s funny at the range ‘ but what do you think would happen if this was somebody’s head?’ 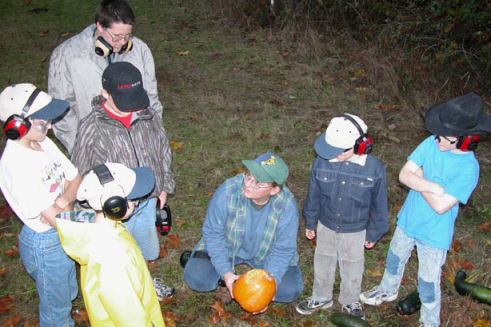 The boys immediately sobered up. ‘You mean ‘ it would put a hole like that in someone?’ Jeremy asked. ‘Bigger in the back like that? From just a .22?’

‘It could,’ I told him. ‘You really can’t tell what a bullet is going to do ‘ but look at the inside of this pumpkin. See how the bullet went all the way through it? If it had gone through someone’s head, it would have destroyed their brain. It might have broken their skull just like it cracked the pumpkin shell. Pretty scary, isn’t it.’

The boys were quiet for a moment, then our youngest one said, ‘But I’m not a pumpkin!!’