This article is lifted verbatim from The LawDog Files, which has got to be the funniest serious blog — or the most serious funny blog — on the web.

It is worthwhile visiting LawDog’s blog when you are done reading the offering below, because the reader comments which follow this article in its original format on the blog contain lots of other ideas for fun on the range. And the rest of the blog is full of tales told in LawDog’s inimitable style, which generally covers all the ground between thought-provoking and pee-your-pants funny. Go see him!

In my earlier post, I made mention that a whole bunch of pink .22LR rifles are apparently being given as presents this year.

It is our duty to see that these new shooters enjoy our sport — and continue to enjoy the sport of shooting.

With this in mind, I’d like to do a bit of a riff concerning introducing New Shooters to Shooting.

Ladies and gentlemen, shooting should be fun. Further, I state to you that shooting must — must — be an enjoyable experience for the new shooter.

“Fun” and “enjoyable” are not always the same thing to a beginner as to an old hand.

As an example, I give you my own experience.

My Granda — Mom’s father — was a deacon at the Church of the Sub-MOA. That old gentleman truly delighted in one-hole groups at whatever distance he was shooting at.

When I was gifted with my first rifle — a Remington 552 that I still possess — Granda was the first person to take me shooting. Bear in mind that I may have been ten years old at the time. Although I don’t think so.

Once I got used to the crack of the rifle … I was shooting holes I couldn’t see in a paper target … whee. I was bored nigh unto tears. 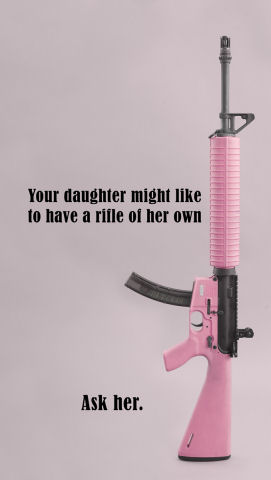 If I had been left to that kind of shooting, I probably would never have picked up a firearm ever again.

Fortunately, Mom and Dad took me out the next weekend with a brick of .22’s and a sack of empty cat-food cans.

Dad set up a bodged-together two-by-four frame at about seven yards, put three cat-food cans on edge across the top and then came back to the line and we loaded the rifle.

I took aim, squeezed the trigger …

… and the can disappeared!

I spent the rest of that afternoon setting up cans and then knocking them back down until I was out of ammunition and light.

From that point on, I was hooked.

Don’t get me wrong: shooting paper targets can be gratifying — if you’re an experienced shooter.

If you’re taking a beginner out, leave the paper at home. Grab something that will instantly reward the new shooter.

Get something that will pop, or fall over, or explode, or disappear. Use targets that do something.

Tuna or cat-fishfood cans are good — and can be reused for about an afternoon. Be sure to pick them up afterwards.

Supermarkets can be cajoled into giving you their manky old fruit. Mealy apples explode quite gratifyingly when hit by a .22LR, as do oranges, grapefruits, etc. And the local critters will probably be rather grateful for the goodies after you depart.

El Cheapo charcoal briquets explode nicely into a puff of black dust, and mass packages of generic candy wafers, lollypops and cookies also explode nicely — and are a bit traditional.

Stay away from glass — nobody wants a shooting afternoon to be ruined by a trip to the ER for stitches. Especially if some other oik broke the bottles that cut you or your children.

Instead, use balloons — filled with water for the tyros.

Many shooting places sell knock-down-reset rimfire targets, and these are a blast to shoot.

Also remember that you are there for the new shooter. Not the other way around. You should not only make the targets fun, you should put them at a good distance. I wouldn’t put a target further than the ten yard berm for any new shooter. Seven yards is probably better.

Yes, I know that you can probably hit that charcoal lump at twenty or thirty yards — but it’s not about you, is it? It’s about your new shooter.

Make sure your new gunnie has good eye and ear protection. I suggest that you use both foam earplugs and earmuffs for your newbie.

If they get tired — pack it in. Don’t force a new shooter past the point of Fun and into Ordeal just for you. If your new shooter gets tired, take them home and then come back, if you’re not done yet.

Make it enjoyable for them, make it an experience they’ll want to enjoy again — and you’ll make a gun person.

Every new shooter you make keeps our gun rights that much safer.