There are few things more satisfying than introducing a newcomer to the shooting world.  New shooters are the lifeblood of the firearms rights movement. Beyond that, it is just plain fun to share your hobbies with a friend.  If you shoot for very long, you can expect that sooner or later, you will have the urge to invite a friend to come to the range with you. 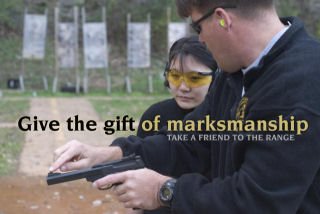 When your friend agrees to come shooting with you, she will very likely have some concerns about safety.  Listen to those concerns.  Do your best to set her mind at ease by both telling her and showing her how a responsible shooter stays safe at the range.

One way you can make your friend more comfortable about the safety of your hobby is to go over range safety long before you set foot on the range.  Give her an opportunity to ask questions, and be sure to cover the following points.  This is best done away from the range, so your friend will be able to hear you easily and ask questions.

First, talk about The Four Rules. If you cannot recite them from memory, you probably are not yet ready to take a newbie to the range. Learn them!

After discussing the Four Rules, there are some specific things your newbie will need to know.

First, make sure she understands and agrees that you will stop her if she is about to do something unsafe. Explain that it’s part of the learning process and that you don’t mean anything personal by it. If your friend does not seem to be taking this or any other part of the safety briefing seriously, stop right there and don’t take her to the range with you. 1

Tell her that if she is shooting and you say, “Stop,” she needs to stop moving and stand still, not turn around to see what’s wrong. Tell her you probably won’t need to do that but that if you do, it doesn’t mean anything except that you are taking care of keeping her safe.

Warn her that you might tap her on the shoulder to get her attention, but that if she is holding a gun she must not turn around.

Talk about the safety gear you’ll wear — eye protection, hearing protection, hats, and high-collared shirts. Explain that sometimes people get hit with empty brass cases. Hot brass isn’t really dangerous by itself, but sometimes people do very dangerous things when they’re hit with brass. Let her know that she will need to trust her safety gear rather than freak out if a piece of brass hits her. Add that even if a piece of brass goes somewhere it’s not supposed to, that she must keep the gun pointed downrange at all times … and that it is best to carefully set the gun down on the bench if she needs to get rid of a piece of brass.

Discuss rules specific to your own range, rules such as staying behind the yellow line during cease fires, or not going forward unless the flag is up. Explain that range rules are different from one place to the next, and that the specific range rules are posted so she doesn’t have to work too hard remembering that kind of stuff.

Then and only then, you can discuss how to shoot, and the shooting basics of sight alignment, grip, and trigger squeeze. Try not to overwhelm your newbie here. If her eyes glaze over by the time you get to this point, stop talking. The only really important thing she needs to know is how to be safe. Everything else is just gravy.

Things to bring with you to the range:

Things to leave at home:

Put the target close.  Four to seven yards is ideal.  Anything over around ten yards will probably frustrate your new shooter, and stymie your attempts to help her have fun.

Set out only one gun.  If you’ve brought more than one, keep the others boxed up until she is ready for the change. Set out only one magazine. Don’t put the ammunition out until after dry fire.  When you do, set out only one kind of ammunition. Avoid confusing your newbie with clutter!

Show her how to hold the gun and how to stand. Do not make this complicated. Stick with the basics of keeping her thumbs out of the way of the recoiling slide or her fingers away from the cylinder, so she’ll be safe.

Tell her she’ll need to grasp the gun tightly. Do not talk too much about recoil, but do mention it in passing as a reason to hold the gun firmly.

Before loading the gun, show her the gun’s controls, and have her practice racking the slide a few times.  Watch her trigger finger and remind her to keep it alongside the frame rather than on the trigger while she is dropping the magazine or working the slide.

Talk to her about what the sights look like and how they are supposed to line up on the target. Draw a quick sketch of that if she seems to need it, otherwise don’t.

Have her dry fire.   While she dry fires, be especially conscious of her muzzle direction and remind her to watch it if necessary.

Watch her trigger finger while she dry fires, and remind her that the instant the gun comes down off target, her finger must also come off the trigger.

Show her how to load ammunition into the magazine. Have her watch you while you fire one or two rounds, so she knows what to expect.

Fire very, very slowly so she doesn’t try to imitate you shooting fast.

Then it is her turn.

Start by having her load one round.  Later on she can load the magazine full. You do not know how a new shooter will react to the first shot firing, so it is safer to load only one round at a time.  You also want her to familiarize herself with manipulating the gun, which she will do as she repetitively loads it.

Resist the temptation to reach in and “fix” anything for her, unless she asks for help. If she does ask for help loading the gun, show her again how to do it, and then unload it and have her do it herself so that she can learn how.

Have her load one, then shoot one, for at least 10 rounds.

Stand just barely behind her strong-side elbow, within easy reach, while she is firing. A surprising number of newbies will turn around with the gun in their hands immediately after the first shot goes. By standing close, you can be ready for this and are able to stop her if needed. Another reason to stand close is that the most common reason a new shooter turns around is to look for her mentor.  Your presence next to her avoids giving her a reason to turn around in the first place.

Be aware that a certain number of new shooters have an emotional reaction to the first shot firing, and may even get tears in their eyes. In my experience, unless your newbie is working through some personal traumatic event related to guns, this reaction is a normal, physical response to the major adrenalin dump caused by the unfamiliar sensations of firing a gun. If it happens to your newbie, reassure her that it’s a normal response and doesn’t mean she’s weird. Help her to settle back down again and encourage her to work through it once she has settled down enough to remain safe.

Watch her hands while she fires, not the target.  Keep your eye on her trigger finger especially.  Remember, the holes in the target will still be there when she is done shooting, but you must see what her hands are doing right now.

Also watch her weak-hand thumb. Some folks will put it behind the slide sometime during that first trip to the range. For revolvers, watch to be sure her fingers do not get too close to the cylinder. Your new shooter does not need to hurt herself today.

Nag about her trigger finger as often as you need to, but do it politely. Don’t give up on reminding her if she forgets more than once.

Do not say anything bad about her marksmanship.  You weren’t all that hot the first time you shot either and marksmanship is not the name of the game today anyhow. First priority it to be safe, second priority is to have fun. If she is doing both those things, she is doing very well.

After she has fired at least ten load one/shoot one rounds, she may be ready to load more than one at a time. Some folks take longer.  Don’t suggest she move up to that until you are convinced she can do so safely.

Suggest that she takes her first target home to keep. Write the date on it, and sign it as a witness.

Invite her to come shooting with you again.  Not “sometime,” but for a specific date and time. And follow through.

Have fun and stay safe!