I placed this article in the Mindset chapter, but it might just as well have been placed in the Social chapter, because it’s a lot less about making up your own mind than it is about how to explain that decision to others. If you haven’t yet come to the place where you believe you really could use a firearm to defend yourself in an extreme situation, please keep reading anyway. You might find something here that strikes a chord.

A few years back, a female relative approached me with some concerns she had. “Kathy,” she  asked me, with somewhat elaborate casualness, “your husband tells me you’ve been taking a lot of shooting classes…?”

“Yep,” I told her, “I’ve got another class coming up in March, an advanced class which I’m taking over again because I didn’t do as well on the test at the end as I’d hoped. It’s pretty challenging stuff.”

She shot me a weird, sidelong glance, and then said, “Well, as long as you enjoy it. You know, guns really scare me. I like shooting at paper a little bit, but … I’d never be able to shoot it, like at another person I mean. And guns really do scare me.”

“My husband kept telling me I should carry one, back when I was doing all that driving every weekend by myself. But I thought, you know, I’m not going to use it, I really wouldn’t.”

I told her, “I understand what you’re saying. I think you’re safer without a gun than with one, if you aren’t sure you could use it.”

She said, “Yeah, that’s it exactly. It really would get taken away from me and used against me, if I wasn’t willing to use it.”

“Well, that’s true. If you don’t think you would use it if you needed it, you shouldn’t carry a gun.”

She nodded. “Anyway, um, er (stammer stammer stutter), I wanted to ask you. Do you think you could use a gun, like that? Really?”

She obviously expected me to say no, or to have some problem answering. Instead I took a deep breath and jumped in with both feet. “Yes, I could.” She blinked. I added, “I wasn’t sure at first, but I got thinking about the kids. If someone tried to hurt or kill one of my babies –”

Laugh. “Yeah, I would, too. Wouldn’t have to think about it at all. Don’t touch the kid.”

“Just me? Well, growing up without a mom would hurt the kids, wouldn’t it?”

She was quiet for a minute, then said, “Yeah, I can see how you could get there that way.” Then she changed the subject so abruptly that I had to wonder if she’d just decided that I was the moral equivalent of an axe murderer. 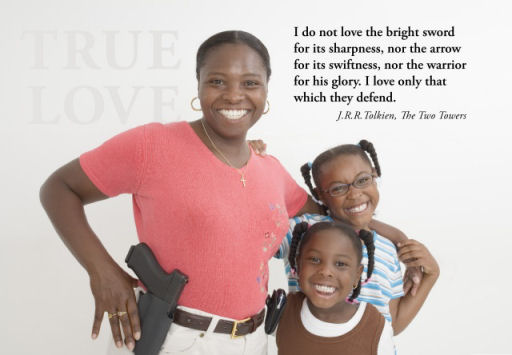 Obviously all such conversations are not nearly so peaceful and non-confrontational. Whether it’s a relative, a friend, or a co-worker, answering concerns like this can be a difficult task. On the one hand, you want to reassure them that you’re still a normal and civilized human being. But on the other hand, it doesn’t feel good to lie to yourself, or to anyone else, while you’re trying to work this sort of question out in your own mind.

Probably the best advice I can give you on that score is to try to avoid such conversations in the first place if you can. Don’t advertise that you’re a gun owner or that you’re thinking about getting a gun, unless you are willing to field questions like this from people who really won’t understand. Especially if you are still working out the issues in your own mind, it can be really awkward and difficult to deal with the same questions from others.

Although “protect the kids no matter what” is hard-wired into most parents, not everyone has children. Furthermore (I’ll probably get kicked out of the Women’s Club for saying this so baldly), I’m of the opinion that my own life would be worth defending, even if I had never had children. You don’t need to have kids in order to justify your right to save your own life and protect your body. So even though I pulled the for-the-kids card in the conversation that started this article, it’s not really the line of thought that resonates most strongly for me.

Another way to answer the question could be to point out that every animal on the planet, from the lowliest worm up to the largest carnivore, has a built-in reflex to protect its own life. Human beings have this reflex, too. When you were a kid, did you ever try to hold your own breath until you passed out? Most people can’t do it. Even if you are one of the very rare people who can, your body takes over for you and starts breathing again as soon as your conscious mind is out of the way. This is important because it’s very easy to claim, when you are sitting in your living room calmly contemplating different options, “Why, I’d let him kill me before I would ever fight back.”  But your body, threatened with death, will have different ideas. It has a built-in reflex to fight back and defend itself. So, when you know death is the alternative, you will fight to protect yourself if you can, using whatever defenses you are able. If you have an effective defense tool within reach, you will use it. 1

The drawback with using this angle is that while the defensive-instinct argument is absolutely true, it simply isn’t convincing to people who have never been near death themselves. And it may be difficult to discuss in polite company, because most people have some level of denial about what they are and are not capable of doing under stress. But it may be worth mentioning, if you think you can get away with it, because it’s a meme that people will think about later if they are honest with themselves.

“Could you really…?” sometimes means the person asking the question really believes that nothing could be worse than taking the life of another human. Maybe they are thinking that the worst that could possibly happen, if they didn’t defend themselves, is that they would die. For a Christian who believes in the reality of heaven, or for other religious people, that’s not such a threat.

But is death really the worst possible thing that could happen? Not to my way of thinking! I don’t want to sicken you, my gentle readers, with grisly and unnecessary tales of disgusting events. You read the newspapers and watch the news as often as I do. Having your loved ones tortured and slowly killed in front of you, while you watched helplessly — that would be one thing far worse than dying outright. Living with yourself after something like that might not even be worthwhile. I’m sure you can think of other horrible possibilities along the same lines, and if you can’t, I want your imagination. My own is too vivid.

Sometimes the question means that the person asking it believes that no human being, no matter what he has done, really deserves to be killed for his actions. 2   That’s not a debate to get into here, but I will say that such an argument usually shows that the person making it does not understand the nature and purpose of self-defense. Contrary to what Hollywood might have us all think, self-defense is not about revenge, and it’s not about punishing the attacker. It isn’t even about justice. Someone who defends herself is not passing judgment on her attacker. She is only trying to survive until society’s watchdogs arrive to stop him and then (eventually) to pass judgment on him.

Occasionally the “Could you really…?” comes from a man who has quaint notions about women’s physical capabilities and odd beliefs about any woman’s emotional resolve. Were it not for the fact that women ask this question of other women nearly as often as men do, I might be tempted to slap the sexist label on the question itself. It isn’t. But there’s no denying that sometimes the question comes from men who are motivated by some very offensive ideas. I’ve never found a good way to deal with such people except to ignore them and move on. You can’t please everyone!