Time for true confessions: I carry a handgun on my body even when I am at home.

There were a lot of reasons that went into this. Oddly enough, the entire reason I got a handgun in the first place was so that I could wear it at home. It wasn’t until I’d purchased the gun, and looked into the laws, that I realized the simplest thing to do would be to keep the handgun under my clothes every hour I was awake, taking it off only to enter places where the gun was illegal. That was when carrying the gun became my default setting, and taking it off became something that required deliberate thought.

When we moved into our rural home, my husband and I realized that our home security needs would be different than they had been when we were city dwellers. For one thing, our nearest neighbors were well over a quarter mile away, and rarely home. We couldn’t therefore count on that legendary country neighborliness to bail us out if anything bad happened. Furthermore, because our county is large but lightly populated, a fast police response would take over a half an hour on a good night. Finally, my husband had gotten a job which forced him to work irregular hours, and he often was gone late into the night, leaving me home alone with our young children.

For all these reasons, I decided that I really wanted to have a firearm available to protect myself and our children when my husband wasn’t around to do the job. But my very active children had taught me that they could get into more trouble more quickly than anyone else would ever believe, and I was worried about keeping them safe. How was I going to keep them from getting the gun? 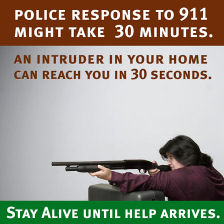 At first I thought I would use a long gun, probably a shotgun, to defend our home and family. Since I had very little experience with handguns, but had handled shotguns as a youngster, a shotgun seemed more familiar and easier to work with. Furthermore, nearly anyone you ask will tell you that a shotgun is an ideal home defense weapon, because it is very powerful, very threatening, and because (this one cracks me up), “You barely have to aim it.” 1

But I got thinking about it. If a rapist or murderer came slamming through my front door, would I have time to fetch a shotgun from the next room in time to save my children’s lives and protect myself? Possibly not, especially if the gun were securely locked up apart from its ammunition, and its ammunition were secured behind a second lock, as most safety experts recommend.

Worse still, if someone did come slamming in the front door, or slithering in through a window, would I have to make the awful choice to leave my children alone in the room with him in order to grab the gun? What if he grabbed one of my kids and just … left? I shuddered at the thought!

I considered leaving the shotgun accessible to me in the living room instead of in a back room. But what if we were all in the back of the house and an intruder entered? The dilemma remained the same.

Then I wondered, if I could easily get the gun, what would stop the children from getting it? They’d already taught me that they could get into nearly everything in the house when I wasn’t looking. I’d long considered childproof locks a sick joke. So what could I do?

There had to be a better way.

Around this time, a friend of ours revived his own interest in handgunning, and invited me to come shoot with him and some mutual friends. Why not? As I fired a handgun for the first time in my adult life, it suddenly occurred to me that I was holding the answer to our home-defense needs in my hands. At that moment, I decided that I would get a handgun, learn how to use it, and keep it with me at home.

After all, I reasoned, I never have any idea what the little darlings might be up to in the next room. They might have figured out the combination to the safe, and they might have snuck away with my keys to try them all out on the ammunition cabinet.

But no matter what my pestilential children might do out of my sight, I knew that I could keep a gun underneath my personal clothing without them getting their grubby little paws on it. At least, not without me noticing.

So I set out to do just that. I decided I would carry a gun at home.

Not long after that watershed moment, and with the help of that same family friend, I purchased my first firearm, belt, and holster. It took me about 24 hours to realize that a woman with curves cannot comfortably carry on the hip, and I moved the holster around to in front of my hip instead.

It took another 24 hours for me to realize that it was just silly to lock the gun away when I left the house. After all, bad stuff happens in public too. Furthermore, with multiple toddlers, I was already fed up with taking what seemed like 16 dozen trips in and out of the house every time we went anywhere. 3 I surely didn’t need to add yet one more thing to our leaving routine.

At this point, you are probably wondering about practical little questions — stuff like, “What do you do with the gun at night?” and “But what about kids sitting on your lap?” and “Isn’t that uncomfortable? 4 Those questions each deserve an article of their own, but for now it should be enough to say that we worked things out.

Because the gun is concealed, and because I defused the kids’ curiosity early on, I’ve never had that much trouble hugging them or cuddling them or playing with them while wearing the gun. I learned to keep them from bumping the gun when we were playing, and otherwise it simply doesn’t come up.

At night, I lock my bedroom door. I leave the gun inside a fanny pack lying in an open lockbox near the bed. If the kids need me in the middle of the night, I either lock the lockbox before I open the door, or pick the fanny pack up and put it on with my robe. Undoubtedly others could find other solutions to this problem, but this solution has worked pretty well for our family.

Is carrying a gun at home for everyone? No, most decidedly not. It takes a certain commitment to carry it off. But I’m here to tell you it’s not impossible. For me, carrying the gun at home seemed the easiest and simplest answer to the question, “How do I keep the gun away from the children but accessible to myself?”