My mother is the person who made me. And she’s done it twice. 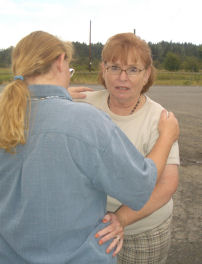 I don’t remember a lot about the first time, because it began when I was too young to remember much of anything.

But I clearly remember the second time she made me. It was shortly after I’d begun carrying a handgun for personal defense, before I’d figured out the art of giving someone a hug without giving away the secret. She and my father had offered to take my children to a movie, so the kids and I piled into the van and drove to meet them at the theater. As always, my Glock 26 was strapped securely to my waist in its kydex holster.

When I got out of the van, my mother came running over to give me a hug. As she put her hand around my waist, I felt her stiffen up and pat my hip. Then she pulled away and looked at me accusingly. ‘What is that?’

As I found out, if you carry a concealed weapon very often, the odds are that sooner or later, someone you care about will discover that you’re carrying one right then. The question is what to do next. How can you handle the situation with a minimum of fuss and reassure your family and friends?

Sure, you’re probably a little upset. After all, you didn’t want to get made and even if you were planning to tell them at some point, the timing is probably less than ideal. But you don’t want to give them the impression that you ‘ a person equipped with a loaded weapon ‘ are prone to panic.

Staying calm has other advantages, too. Getting made is really just a minor social gaffe. But a too-vigorous reaction might give your friends the idea that you’re on the run from Johnny Law. This is another impression you do not want to make.

If you are in a public setting, and your reaction is very energetic, it will be noticed by everyone around you. Human beings are drawn to emotional displays. If you play it cool, you may be able to avoid at least a few prying eyes.

So take a deep breath and smile, even if you don’t feel like it.

Don’t just stand there with your mouth flapping open and shut like a recently landed large-mouth bass. Few things make people more nervous than that. So after you smile, clear your throat and force a sound past those chilly vocal cords.

Of course, some things are better to say than others.

An example of a bad thing to say: ‘Ha! HA! I was planning to use that to kill everyone in the place later! What a laugh!’ If all you can think of is a feeble joke about mass murder, you’re probably better off to keep doing your fish imitation.

Better: ‘Ummmmm, oops.’ You may kick yourself later for your lack of eloquence, but at least you didn’t make the situation worse.

Best: ‘It’s okay, Mom, you know I’m one of the good guys.’ Or (for the guys reading this) to a girlfriend, ‘Yes, but I’m also happy to see you.’ Or after your firearm jumps out of the holster and skitters across the floor, ‘Dang, I’ve been trying to teach it not to do that.’

A light-hearted comment often sends the meta-message that you aren’t worried and that the other person shouldn’t be, either. A Michigan resident named Tim was once told by a local policeman that his gun was printing. Tim smiled and responded, ‘Good, now I can start it on cursive.’ Tim reports that the officer smiled back and replied, ”Good answer, now hide it.’ I did, he smiled and walked away. Never even asked to see my permit. [It was] kinda a good experience.’

Step #3: Answer questions without getting defensive.

This is the tricky part. You want to communicate that you are a responsible person, that you haven’t lost your marbles, and that no one needs to call the police to deal with you. Depending on your relationship with the person who made you, one or all of those things might be a hard sell.

With relatives, their first concern is often whether or not you are obeying the law. ‘My grandmother was a bit concerned one time after she hugged my younger brother and found he was carrying concealed,’ says a young man who now lives in Texas. ‘She thought it was still illegal to carry concealed in Arizona. She didn’t seem especially concerned that he was carrying, just that he do it legally.’

Familiarity with your local laws stands you in good stead here. It’s probably a good idea to refresh your memory about your state’s carry laws from time to time, just so you will be able to deal with such questions.

Some folks can be expected to react with disgust or anger. Be prepared for this, but do your best not to provoke it. If the other person is content to chew you out and then drop the issue, let them. You earned the tongue-lashing by getting caught, and your mild reaction just proves that you aren’t looking for a fight no matter what tools you have on your belt.

Be prepared to deal with questions about your emotional health. ‘You sure do have a lot of fears,’ one of my relatives once told me. ‘Maybe you should talk to a doctor.’ After an accusation like this, the ideal impression to leave is that you listened seriously to their concerns, but that their concerns weren’t serious. You can accomplish this by listening respectfully, while keeping your own responses light and brief.

While the initial reactions might range from cheerful interest, to horrified fascination, to legal concerns, to making digs about your mental health, eventually family and friends do adjust. Well, mostly. Even after some time has passed, your friends might still think you’re paranoid. But as one young man in Colorado admits with a laugh, ‘They think it’s part of my charm.’