I’ll confess right up front: this question makes me cranky. It makes all sorts of assumptions I’m not willing to stipulate. It assumes that all women are alike, for one thing. There is no one best anything for all women! Anyone who tells you otherwise has no idea what he is talking about, so don’t listen to him. He might know something about guns, but he knows nothing about women.

The other assumption usually hidden in this question is that all women are reluctant, beginning shooters with small, weak hands. Some of us might be beginners, but not all of us. Some have small hands, but others don’t. Some are reluctant when they first begin shooting, but most probably are not. Yet this question often makes the assumption that women have to be cajoled and coaxed along, babied and humored, in order to get them shooting. That’s condescending, but worse, it’s inaccurate in the vast majority of cases. Most women who begin shooting do so for their own excellent reasons.

Guys, please hear me out. Your wife’s or girlfriend’s femininity might be the most important thing about her in your eyes, but it really has no bearing on what she can shoot or how well she’ll learn to do so. There are a lot — I mean a LOT — of other variables that matter far more than the sex of the shooter.

Now that we’ve dispensed with the " … for a woman" bit, let’s try to define the question a little more precisely.  Here are some criteria that affect gun choice.

As you will probably note, any of these things might be true of any particular woman, but not one of them is true for all of us. Nor are any of these questions unique to women only.

Let’s take those possibilities one at a time, and see what we can come up with.

What gun for a beginning shooter?

Unless the gun will be used for purposes other than simply learning to shoot, the ideal handgun for a beginning shooter is an appropriately-sized .22LR, either a semi-automatic or a revolver. Many people will tell you that beginners should start with revolvers, but I really believe that the choice between revolver and semi-auto should depend upon what you want to do next and upon your personal preferences. If you prefer semi-autos, there’s no reason in the world you cannot learn to shoot with one.

What gun for someone who is afraid of noise or recoil?

Unless it is a defense gun, a .22LR is the ideal caliber for someone who doesn’t like noise. It’s not exactly quiet, not in the way that a back corner of the library is quiet, but .22LR doesn’t have that deep boom and shockwave so beloved of high power shooters.

People who are particularly noise-sensitive should consider doubling up on hearing protection at the range. If you wear both plugs and muffs, you may be much more comfortable with the noise than you’ve ever been before. Also consider shooting at an outdoor range rather than an indoor one; indoor ranges do tend to amplify the noise quite a bit, often to the point of discomfort for those wearing inadequate hearing protection.

Although shooting a .22 caliber may be more pleasant on the range, if you’re intending to use the gun for defense, a .22LR just isn’t enough gun.  The only advice I can give you in good conscience is, "Get over it." Start on a .22 if you must, but work your way up to defense calibers — .380 ACP or larger — as quickly as you can. Alternatively, you could spend an afternoon or a weekend forcing yourself to shoot calibers way stronger than you’ll ever need. After that, a .380 ACP or a 9mm will seem like a piece of cake.

By the way, it’s important to note that calibers all feel different when you shoot them. It’s easy to think, "I hated the .380 so how could I possibly stand anything bigger?!" But the truth is that many people find larger calibers more comfortable to shoot than smaller ones. Small calibers often have a snappy-slappy thing going on. The larger ones are noisier, but you may be pleasantly surprised by the feel of shooting one. Don’t be afraid to try.

What gun for someone who doesn’t want a gun?

Don’t get her one.

What gun for someone who isn’t mechanically inclined

For the women reading this: if you’re smart enough to drive a car, you can learn as much as you need to know about any gun you care to shoot. No matter what the old guys in the gun shops might try to tell you, guns are honestly not that complicated! The problem is that few people are really systematic teachers, so if you’re trying to pick it up from an enthusiastic friend, well, you might be better off taking a class.

For the guys: have you ever looked at a sewing machine? Complicated beasties, those. Firearms are simple in comparison. Don’t underestimate your wife/girlfriend/sister/mom.  She’s probably smarter than you’re giving her credit for. 2

What gun for someone who weighs less than __ pounds?

Her overall size is mostly irrelevant in choosing a handgun. But short people often have small hands, and her hand size will matter greatly. See the articles titled, "Guns for Small Hands" and "Trying on a Handgun."

In choosing a long gun, look for shotguns and rifles with youth stocks. I’m 5’4", and I prefer stocks with a pull length of around 13 inches.

Quick note about caliber: the smaller you are, the more important it is to use good techniques to absorb recoil. An aggressive forward stance can often make all the difference in the world when shooting larger calibers.

What gun for someone with small hands?

What gun for someone with weak hands, or who has joint issues, such as arthritis?

First, it is my opinion that any healthy adult, male or female, can be taught to retract the slide of a semi-automatic pistol. If you are in good health and would like to use a semi-auto, but have difficulty with the slide, please see the article titled, "Rack the Slide" for more information, or get yourself to a good class to have someone show you how to do it in real time.

However, if you have physical issues that affect your hand strength, all is not lost. You can still learn to shoot a handgun.

The classic advice for those with weak hands is to get a revolver. However, not just any revolver will do. It has to be heavy enough to soak up recoil, even though the added weight might make it a chore to hold on target. When shopping for a revolver off the range, you’ll be tempted to select the lightest one you can find. Try to remember that weight is your friend, and instead choose the heaviest one you can manage. 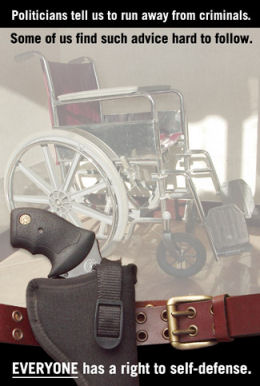 Of course, if you literally cannot hold a heavy gun on target, you’ll need to shop for a lightweight instead, and plan to deal with recoil as well as you can. In such cases, remember that you can usually find ammunition loaded with less powder — sometimes called "light" or "target" loads — in most calibers.

If both recoil and gun weight are an issue for you, you may need to go with light ammunition for defense as well as for practice. It all depends on what your physical ailment is and what features you are willing to trade away in order to get what you need. In truth, a lightly-loaded large caliber is probably more effective than a heavily-loaded small caliber, and in many cases would be more pleasant to shoot.

Recoil can also be absorbed by cushioning rubber grips which can be added to most revolvers and many semi-automatics.

Especially if you choose to go with a double-action firearm, pay special attention to the ease with which you are able to pull the trigger all the way back. Depending on the reason your hands are weak, after you purchase the firearm, you may want to dry fire every single day for awhile so that you can build up the  strength in your trigger finger. However, if you’re plagued by joint problems or other non-fixable issues, you may need to keep shopping until you find one with a trigger you can manage. Remember, if you need to use the gun for defense, you will probably need to fire more than one shot.

If the gun is otherwise suitable, but the trigger pull is too heavy, it may be possible to lighten the springs so that the trigger is easier to pull. Be aware that this is not a cure-all; lightening springs can cause other mechanical problems with many guns and can result in light primer strikes and failures to fire if the work is not done properly. Use a qualified gunsmith, and be prepared to switch back to the original springs if you experience any problems with reliability.

Some people with weak hands choose to use the trigger fingers of both hands to pull the trigger, dividing the work evenly between them. This is less than an ideal solution, but with copious amounts of practice, it can work. Remember, though, that if you ever need to use the gun to defend yourself in real life, you may only have one hand free. It’s better if you can find a gun with a trigger you can pull correctly.

Although "get a revolver" is the most common advice for those with weak hands, a revolver isn’t a cure-all and may not solve the problem for you. Some people with joint issues find that semi-automatics are more comfortable to shoot than revolvers, because the recoil tends to be less noticeable as the slide movement absorbs some of the energy. Also, as mentioned above, the long, double-action trigger of most revolvers can be very difficult to pull smoothly. If your hands are so weak that you have difficulty with the double-action revolver trigger, but you also have trouble retracting the slide of a semi-auto, consider looking at the Beretta handguns with tilt-up barrels. These semi-automatic designs eliminate the need to pull back the slide.

Sorry — this answer is under construction.

What gun for someone who just wants to have fun on the range?

Whatever she enjoys shooting, of course.  Lucky woman! She has an excuse to rent a different  firearm every time she goes to the range.

To my way of thinking, a .22LR is probably the most fun caliber, because it is so inexpensive that you never mind burning a lot of it in an afternoon on the range. But, you know, there’s also something to be said for that addictive BOOM from larger calibers … All a matter of personal opinion.

By the way, for pure shooting fun, consider picking up some reactive targets — targets that splash or fall over or send up a smoke signal or pop when you shoot them.  Reactive targets are really encouraging to shoot because (unlike paper) they don’t keep any record of your misses. They just do something cool when you hit them.

Oh, and see the article titled, The F Word

What gun for an experienced long gun shooter who wants to get into handgunning?

Experienced long gunners are often disconcerted by really small handguns. Unless she’s got a specific purpose for getting a handgun (see the possibilities above), I’d recommend beginning with a handgun that has a barrel length of around 4 inches or longer.