An attractive young guy sidled up to me at the range the other day. He’d been watching me shoot for awhile, looking at me out of the corners of his eyes while I worked on my drawstroke. It had gotten harder and harder to pretend I didn’t know he was watching me, so when he finally made up his mind to come talk to me, I was almost relieved. Here it comes, I thought, and braced myself.

“Excuse me,” he began, twisting his hat in his hands awkwardly. “I couldn’t help but notice that you’re a fine shooter.” I smiled my thanks, grateful he wasn’t one of those oh-so-helpful range gods who would start our conversation by nitpicking my shooting. But I was still braced for what was sure to come next, and watched to see what his approach would be. “So, uh, do you come here often?” he asked.

“Not here, no,” I admitted, “I’ve got another range where I usually practice.”

“But you do shoot regularly?” he pursued, almost pathetically eager. “You like guns?” I admitted I did, and he finally got up the courage to ask the question he’d come over to ask me.

You know, if I knew the answer to that one, I could have my pick of any guy at the range.They’d flock around me in eager anticipation that I might let them in on the secret.

But the fact is, I don’t know that. What I do know is how a guy might go about making his woman hate guns. That secret, I can tell you…

Never invite her to the range in the first place. You know she’ll hate it, so why bother? Don’t risk being pleasantly surprised. Instead, spend both days of every weekend at the local range or attending every gun show or IDPA match in a four-state radius. Use every spare second during the week for reloading, cleaning your guns, or just perusing firearms magazines. If she ever comments wistfully that she sure wishes you would spend some time with her, take that to mean she doesn’t want you to shoot any more, and use the opportunity to start a good argument.

Spend all your household money on guns & shooting supplies. Also, lie about it. Convince her you have neither honesty nor self-control when it comes to buying guns and that you need her to put the brakes on your purchases before you go bankrupt.

Disregard her legitimate safety concerns. At least once a week, leave your loaded carry gun on the coffee table where the kids can get it. Especially if your wife worries about safety, handle guns negligently when she’s around. Dry fire while pointing the gun at her cat. Or at the TV. You get bonus points if you accidentally shoot the TV while she is in the room. 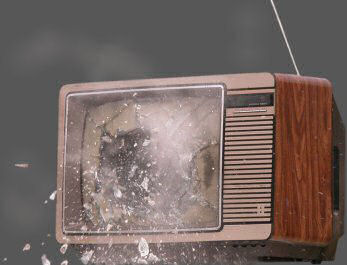 One poor clown I met once used to have a large picture of his wife hanging over the mantelpiece, a beautiful portrait of herself she’d given him for his birthday. His negligent discharge was the most expensive one I ever heard of. It took a trip to Hawaii to repair the damage.

Be a gun slob. After your trips to the range, clean your guns on the dining room table. Put down a newspaper she hasn’t read yet, then spill solvent so that it runs off the edge of the paper. Don’t wipe it up. Let her find it herself later, after it’s ruined the finish. And when you’re done cleaning your guns, leave bits and pieces of used gun cleaning supplies lying on the table for her to deal with.

Always bring every conversation around to guns, shooting, hunting, or politics. Preferably all four. If she’s a liberal Democrat, be sure she knows that there’s no way she can be a shooter without becoming a conservative Republican. If she’s a vegetarian, brag about killing Bambi. This should guarantee that she never wants to talk about it.

If that fails, and she does want to talk about it, be impatient with her questions and dismissive of her concerns. Whatever you do, don’t ask questions or try to understand why she feels the way she does, and don’t provide patient explanations for technical details she doesn’t immediately understand.

If she shows reluctance to learn to shoot, scare her into it. Talk constantly about women who were raped, murdered, mutilated, tortured, dismembered, violated, and just generally had Bad Stuff happen to them, all because they didn’t carry a gun. This works well because most of your tales will involve bad people using guns, and will thus reinforce her suspicion that only bad people use guns.

If she is ever genuinely frightened by a home intruder or a mugger, you don’t want her to talk herself into wanting a gun afterwards. So don’t give her a chance to connect the dots on her own. If you jump in soon enough to tell her how foolish she was to be without a gun, she will spend all her energy arguing with you about whether she should have had one, and argue herself out of wanting one.

Make range trips unpleasant. When she does agree to go to the range with you, pick a filthy indoor range with unpleasant employees, or if you must use an outdoor range, go when the weather is as ugly as it ever gets in your area. Stay at the range for endless hours, and don’t offer to do something afterwards that she thinks is fun. The longer you stay, the more bonus points you get if the range has no bathroom or a dirty bathroom. You get double bonus points if it’s got a really rank portapotty with no toilet paper.

Make sure she’s intimidated by both the gun and the target you expect her to hit. Start her out shooting a big-caliber gun at a tiny, distant bullseye. Load the gun with extra-hot ammo, because it’s so doggone funny to watch a new shooter embed the front sight in her eyebrow. 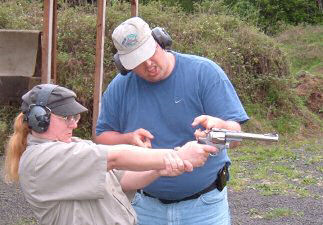 Whatever you do, don’t let her shoot a .22lr at an easily hit reactive target on her first trip to the range. Make her really work to hit paper on a target that is so far away she cannot tell whether she hit it anyway.

Better yet, get her a cheap gun that you yourself wouldn’t be caught dead trying to shoot. She can’t shoot well yet anyway, so what does it matter that the gun you expect her to use is inaccurate, prone to misfires, and has a nasty trigger?

Get her a holster that matches yours, and suggest she carry it on the point of her hip like you do. Don’t believe her or take her curves into consideration when she complains that your holster carried your way is painful for her. If she complains, tell her she just has to get used to it.

Don’t let her develop confidence in handling her gun. Most people only enjoy doing things they’re good at, or could become good at. So load the magazine for her. Load the gun for her. Rack the slide for her. If the gun jams, clear it for her. Don’t let her try to do these things herself, don’t show her how to do them, and, above all, make sure she knows that you don’t think she is capable of learning how to do them. The best part of this is that if she ever needs to use the gun for real, she won’t even be able to get a round into the chamber by herself.

Don’t let her enroll in a class. Especially keep her away from those risky women-only classes, where your gal just might find out about guns that are particularly suited to her hands, may have a chance to try on holsters designed to fit female body types, and might meet other women who like to shoot. If she does accidentally get enrolled in such a class, make sure you contradict everything the instructors taught her as soon as she gets home.

“So there you have it,” I told my admirer. “How to make your wife hate guns in ten easy lessons. I’m sure you’ve never done any of that … have you?”