Before you plunk down your hard-earned money for a handgun — especially a defense handgun — it is a good idea to make sure it will fit your hand. Here’s how to do that.

Check by sight and by feel to be sure that the gun is unloaded. For semi-automatics, remove the magazine and run a finger into the magazine well to make sure it is empty. Lock the slide open and visually look in the chamber. Then run the tip of your pinky finger into the chamber to be sure that there’s a hole in there rather than a live round. Visually check the chamber again before you close the slide. For revolvers, roll the cylinder open and visually count the holes. Then run your finger over the holes and count them again by feel. Visually count the holes again before closing the cylinder.

This sounds obsessive. Let me explain with a visual illustration why it is important to check twice, and count the holes by feel.

Take a quick glance at the picture below. Only a glance. Is the gun unloaded?

This is why we check twice, and touch the holes. When distracted or under stress, it is surprisingly easy to miss seeing things we really didn’t expect to see anyway. And it is just as easy — or easier — to do the same with a semi-auto, and miss seeing the round in the chamber or the magazine in the butt of the gun. So use your hands as well as your eyeballs to check, and never take anything for granted. 1

This part of the trigger finger … 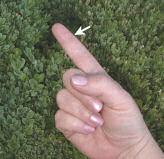 Rests upon the shooting-hand side face of the trigger …

With your finger’s crease thus on the trigger and without pulling the trigger back, wrap the rest of your hand around the gun to get a good, one-handed firing grip.

It is especially important not to cock double-action revolvers or to pull the trigger back on DA/SA semi-automatics, because doing so moves the location of the trigger in relation to the rear of the gun. That means the trigger is not in the same place it would be when you first pick up the gun. You want to know how the gun will fit when you grab it in a hurry — not just how it fits under ideal range conditions.

Notice the location of the trigger in this uncocked double-action Sig pistol. 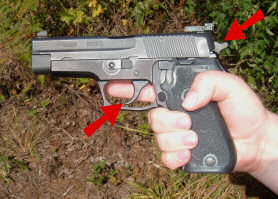 Now see how far the trigger has moved to the rear when the pistol is cocked. 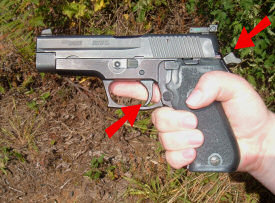 There is a similar change that takes place when a double action revolver is cocked. Cocking the gun shortens the trigger reach, but this is no help to someone who plans to use the gun for defensive purposes. You need to know how the gun will fit when you first pick it up.

So keep your finger resting lightly on the trigger and wrap the rest of your hand around the gun to attain your firing grip. Now look at how the gun fits in your hand.

With the crease of your finger on the trigger, if the gun’s backstrap is firmly centered in the web of your hand, midway between your thumb and forefinger, then the gun fits your hand perfectly. Notice how a correctly-sized gun lines up perfectly with the bones in your forearm. The recoil will go directly into the web of the hand and be transferred along the long bones of the arm, allowing a strong and natural grip without much strain.

If your hand has a lot of extra slack, with your trigger finger curving far out from the side of the gun (so that you would be able to put a large portion of your trigger finger through the trigger guard), then the gun is small for your hand. Note that the small gun still lines up well with the forearm bones.

A gun that’s small is rarely too small for effective shooting, so don’t let this deter you if the gun is otherwise suitable for your purposes. Unless the gun is really radically undersized, it’s generally easy to adapt to a small gun. But you will need to pay special attention that you don’t get too much of your finger on the trigger while firing.

With as much trigger finger poking through as in the picture below, it is nearly impossible to pull the trigger at all — let alone to pull it smoothly and well. But this is an easily-corrected shooter error, not a problem with the gun.

If the gun’s backstrap cannot be centered in the web of your hand, midway between thumb and forefinger joints, while the crease of your trigger finger is on the trigger, then the gun is too big for you.

In the picture below, notice that the too-large gun does not line up nicely with forearm bones, and the recoil is going more into the thumb joint than into the web of the hand.

Provided you are able to reach all the controls, you can probably work with a very slightly too-large gun. You may be able to work with it as-is simply by scootching your hand around, so the backstrap is slightly off-center when your finger is on the trigger. Or you might consider putting a shortened trigger in it, which will reduce the distance between trigger and backstrap. 3

However, if the gun is very much too big for your hand, the recoil will be going straight into the joint at the base of your thumb when your finger is properly on the trigger. You may be able to shoot that way, but it isn’t a very secure hold and it will probably be painful to fire a lot of rounds. Even if it doesn’t hurt, it can cause joint problems down the road and really isn’t worth it in the long run. You will need to look for a different gun.

Incidentally, one possible cause of limp-wristing may be firing a gun that is too large for one’s hands. Notice the direction the recoil will go in the picture above, and compare that to the solid platform provided by the long bones of the arm when the gun is the correct size for the shooter.

After checking for grip fit, also check to be sure you can reach and use all of the gun’s controls.

It is good to be able to send the slide forward again by using the slide release without losing a solidly correct firing grip. But if you can’t do that, it’s really okay. Just plan to use the slingshot or overhand technique to send the slide forward. Note that if you want to play any of the action pistol games, however, releasing the slide using the lever is generally quicker than using slingshot or overhand. If you plan to compete, get a gun with an easily-used slide release.

Just as you would try on a pair of shoes before buying them, if it is at all possible, try to fire the gun or one like it before you purchase. Many gun stores and ranges have rental guns. While rental fees can be expensive, paying such fees can often save considerable money in the long run because of the mistakes thus avoided.