When a woman purchases her first defensive handgun, she begins a personal journey that is often exciting, frequently bewildering, and usually provides a few unexpected bumps and thrills along the way. Sometimes her journey starts with a traumatic event; more often, it is the outgrowth of life changes both big and small, or the doing of friends or family who first urge her to set foot upon the path to determined self-defense.

Facing such a life change, entering an unfamiliar subculture, and dragging along at least a little emotional baggage, it is no surprise that a woman in search of her first firearm might feel a bit overwhelmed the first time she steps into a gun shop. “My first steps into a gun shop seven years ago were with fear and trepidation. I knew I didn’t belong there and had no business walking up those threadbare astro-turfed steps,” admits concealed-carry permit holder Stephanie C’ceres. “I walked in with my eyes averted hoping no one would address me because I sure didn’t know what I was going to say to them.”

That’s not an uncommon feeling for a woman entering such an unfamiliar world. It might even be the norm. 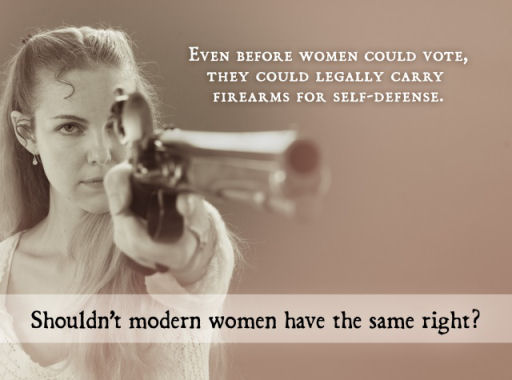 With a little help from my friends …

When women reminisce about purchasing their first defensive firearms, friends and family often figure prominently in the stories. This is not surprising, since women are usually social creatures. Nor does this dynamic stop with the purchase of a gun; women are perhaps more likely than men to go to the range with friends than by themselves, and more likely to seek out social shooting events. The wonderful reality here is that good friends can often ease a new shooter’s induction into gun ownership, and make that first gun-shopping experience much less traumatic.

After a home invasion left her battered, bruised, and feeling vulnerable, Cassandra, a pediatric nurse in Tennessee, called some friends in law enforcement for advice. “I called them thinking they’d tell me pepper spray or martial arts classes because they all knew how I felt about guns, but all of them said we’re going to teach you how to shoot. We’re going to get you over this fear and you are going to own a gun. It took several months to heal up from the attack, and then to get past the fear of guns, but I did it.”

“They brought me lots of guns,” says Cassandra of the friends who helped her. “I shot everything, just everything you can imagine. I had a lot of things to deal with and I needed to figure out what I was comfortable with, what fit my hand and what I was willing to practice with. They really helped expose me to a lot of different handguns.”

By the time she was ready to purchase her own firearm, Cassandra felt confident enough to make her own selection. “And then,” she adds with a laugh, “my friends bought me a gun-warming gift — a bright purple range bag that I just love. And a box of ammo, and a cleaning kit.”

Many women have discovered that even if they have a husband or friend ready and willing to do every last bit of the legwork or even purchase a gun for them, it really pays off to do your own shopping anyway.

“My husband bought me my first gun,” says Jennie van Tuyl, a gun shop owner in Washington. “He tried to research which guns had smaller grips for me. We learned the hard way that one needs to be involved in the shopping for her own gun. I decided I needed a gun that fit my hand better and was easier to conceal.”

Many women could sing along on that chorus. The well-meant gift gun that ends up gathering dust in a deserted drawer or (better) in the back of the safe is very nearly a clich’. Almost as trite is the gun purchased by a loved one while the woman comes along as a silent partner rather than an active participant.

The people behind the counter often share frustration with this turn of events. Tamara Keel, former sales manager at Coal Creek Armory in Knoxville, Tennessee, says, “You know it just annoys me so much to have to elbow the man out of the way to make the sale to her. She’s got to want the gun for herself and it’s got to be what she wants, or it’s just going to end up getting shoved into her nightstand drawer anyway.”

Larry Correia, formerly part owner of a gun store in Draper, Utah, agrees. “Sometimes couples will come in, and he’s just dragging her along. We are going to end up selling them the gun he wants her to have, rather than the gun she really wants or needs, and that just doesn’t do anyone any good. It is really better if she speaks up.”

What this boils down to is that no matter how tempting it might be to let someone else drive your handgun purchase, you are more likely to be happy with the end result if you actively drive the process yourself.

Bumps in the road …

Christine Cunningham, a custom holster maker who lives and works in Portland, Oregon, tells the following story about her first handgun purchase: “The first store we went into, although it was obvious that I was looking at the guns in the counter, the guy working there ignored me and asked (my husband) Grant what he’d like to see. When it was pointed out to the clerk that I was the one looking for a gun, he gave me a very patronizing look, and then pulled out a snubnose .38 special, and said, ‘Well, she might be able to handle this.’ I still believe that my instant dislike of revolvers at that time was due to his attitude, and it took several years before I overcame that. When I said that I wanted a semi-auto instead, he then pulled out a very small .22 for me to see, and then turned away and ignored any further questions.”

Even a professional who has worked within the firearms industry for many years is not entirely immune to such treatment. Tamara Keel wryly comments, ‘I had walked into a gun store, and my pockets were really flush. I was after an expensive 1911. I walked in and I stood at that counter for probably a good 30 minutes. The guys behind the counter milled back and forth, talked to each other, joked around with each other. They were helping guys who walked up on either side of me. I was standing there, literally with a roll of hundred dollar bills in my pocket, and they just did everything they could to ignore me. I finally walked out and never did buy anything from them. They’re out of business now.’

“You’re going to love this one,” longtime handgun owner Diane Walls told me. “I just went to the gun show last weekend. We were looking at mostly collectibles in a display case and there was this little tiny .22 revolver that was just minute. It was quite small and rather elderly looking. The guy behind the counter looked over and said, ‘That’s just the thing for a little lady like you. You could put birdshot in it and pop your husband in the butt when he acts up!'”

While there is no shortage of women out there who tell similar stories, this kind of treatment really is not the norm. A more typical, though less memorable, shopping story: “I had a very nice experience buying my gun,” says Jennie van Tuyl. “Bill and I went to Bullseye in Tacoma and there is actually a woman who works there and she is very helpful and knowledgeable and made it a fun experience for me. I had learned what I liked and did not like from shooting other people’s guns.”

Other women praised their own local gun shops for taking extra time with them on their purchases, explaining firearm function and offering extra goodies — everything from discounts on holsters, to free range time, to cleaning kits, to invitations to join classes and shooting leagues. When shopping for a gun, it is worthwhile to seek out and support such shops.

What’s a woman to do?

Stephanie C’ceres admits, “In retrospect, I know that any ‘little lady’ treatment I thought I received (on my first trip to the gun store) was either imagined or self-inflicted. The owner’s wife and daughter both work at the shop. That store doesn’t have much of a ‘little lady’ syndrome. I know that I myself promoted the initial ‘helpless damsel in distress’ aura because I was in distress and I was feeling helpless.”

Gila Hayes, of the Firearms Academy of Seattle, has some advice for women who fear facing discrimination when shopping for a handgun, or who feel overwhelmed by the task. Do your homework first, she suggests.

“There are a lot places that we as women go that we have to communicate despite prejudices. You could think, ‘I’m a woman trying to do this in a man’s arena, poor me, I just know I’m going to get treated badly,’ and you could give up. Wouldn’t it be better, though, to think, ‘I know this could be challenging, so in advance I’m going to read everything I can, learn the vocabulary, and I’m going to find someone who knows about guns who will answer my questions.’ Then you need to keep at it until you get the information you need and until you get explanations you can understand.”

This process of doing your research may very well take you to several gun stores until you find a good match, but the time invested in it is also time spent developing relationships and resources that will serve you well in the long run.

Along the same lines, gun salesman Larry Correia says, “You need to know what you’re looking for. Even if you don’t know what brand or type, walk in knowing what you will want to do with that gun — what you’re buying it for, whether it’s for carry or for home defense or for a combination of things. Be confident, and don’t let the salesman boss you around.”

Like each of the other women I talked to in writing this article, Cassandra says she has had both good and bad experiences in gun stores, but she prefers to emphasize the good. “Some gun stores just go out of their way to support women shooters. We should really reward that kind of good behavior.”